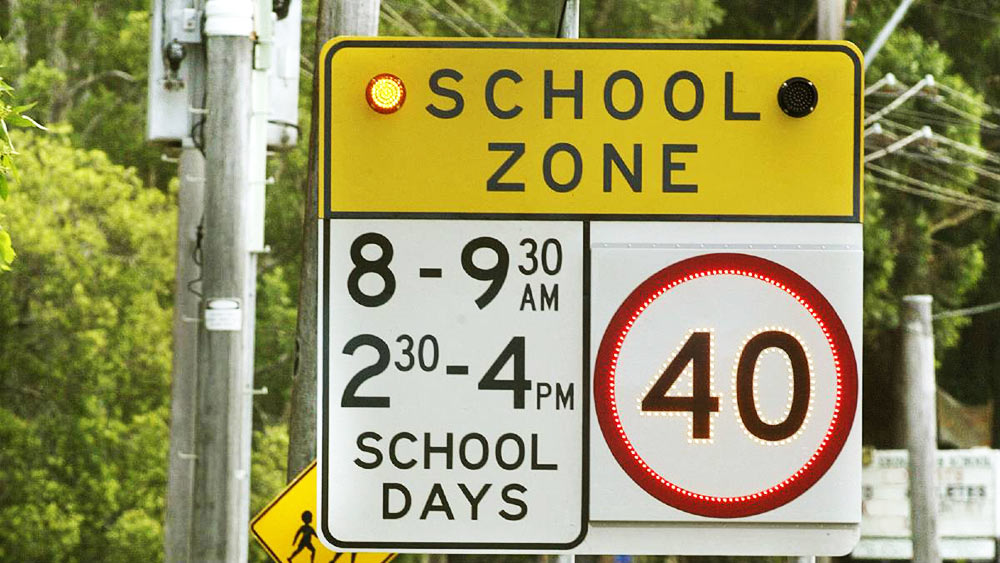 It’s so easy to get caught out doing the wrong thing as a driver in a school zone, and it is one of the most common traffic offences, particularly here in the Northern Rivers.

Why? Well, for a couple of reasons. Firstly, in the little villages in and around the hinterland, there are small country schools where you might not expect, particularly if you don’t travel those roads often – Newrybar, Lennox Head, Upper Coopers Creek, Coorabel, Eureka are a few that come to mind.

Secondly, school zones don’t operate during the holidays and are only enforced at two specific periods of time during the day. As a driver it’s pretty easy to ‘forget’ that school zones exist.

But now, the school year has officially begun and it’s time to be vigilant behind the wheel. Obviously, school zones exist to keep our kids safe, while they’re walking, riding bikes, crossing roads, getting on and off buses etc…  The speed limit within school zones is strictly 40km per hour.

The school zone time frames are generally 8 to 9.30am in the morning and from 2.30 to 4pm in the afternoon. There are some non-standard school zone times in New South Wales – these are not common, and they are identified by red/orange school zone signs showing the times when school zone flashing lights operate.

The penalties for exceeding the speed limit in a school zone depend on what type of vehicle you are driving, and what type of license you have. Speeding offences are accompanied by significant fines, double-demerit points, and possible suspension of your license in some circumstances. Learner and provisional license holders may have their license suspended for at least 3 months for speeding offences, generally because of their low demerit point allowance.

But parents dropping their children at school may need to brush up on the rules too – there are some you might not know about. Finding out the hard way, that is, being caught, can be an expensive lesson.

Tougher penalties apply in some instances, where the driver is using a mobile phone for example, or if a driver tests positive for alcohol or drugs, or if the driver has an unregistered vehicle or previous driving offences on record.

It is an offence to approach a school crossing ‘too fast’ or not to stop at a crossing when directed by a school crossing supervisor. The fine is $464 and 2 demerit points – the penalty can be more, depending on the speed you’re driving at the time.

Not reversing your vehicle safely in a school zone and attracts a penalty of $275 .

Obstructing access to a driveway or pathway is also an offence that comes with a $352 fine and 2 demerit points.

If you receive a traffic infringement notice, you need to pay by the due date or arrange a payment plan, through Revenue NSW, otherwise you run the risk of attracting late fees and other penalties.

If you wish to contest the notice, you can apply to Revenue NSW to have it reviewed.

Following this process if you’re not satisfied with the outcome, you can challenge the fine in court, although you should be aware that courts are currently backlogged as a result of the Covid-19 pandemic, although many cases are being handled by videolink, email and other technologies. Even so, it may take some time for your case to be resolved.

It’s also important to remember that if a court finds you guilty of the offence, it can impose harsher penalties than the original fine and demerit points.

If you need advice before you decide which option you’d like to take, it’s wise to contact an experienced, local court lawyer for an initial consultation. The local court lawyers has a paralegal, Irene Healy, dedicated to advising and preparing license suspension appeals for provisional license holders, court-electing on drivers’ license suspensions, good behaviour licenses for unconditional license holders, and all things relating to traffic law.

This post is informative only. It is not legal advice.

We service Sydney and NSW courts, but specifically the area from Coffs Harbour to Byron Bay, Ballina, Mullumbimby and Tweed Heads regions on the Far North NSW Coast.

PrevPreviousWhat happens when a child is charged with murder?
NextCyber crime is on the rise – make sure you protect yourselfNext