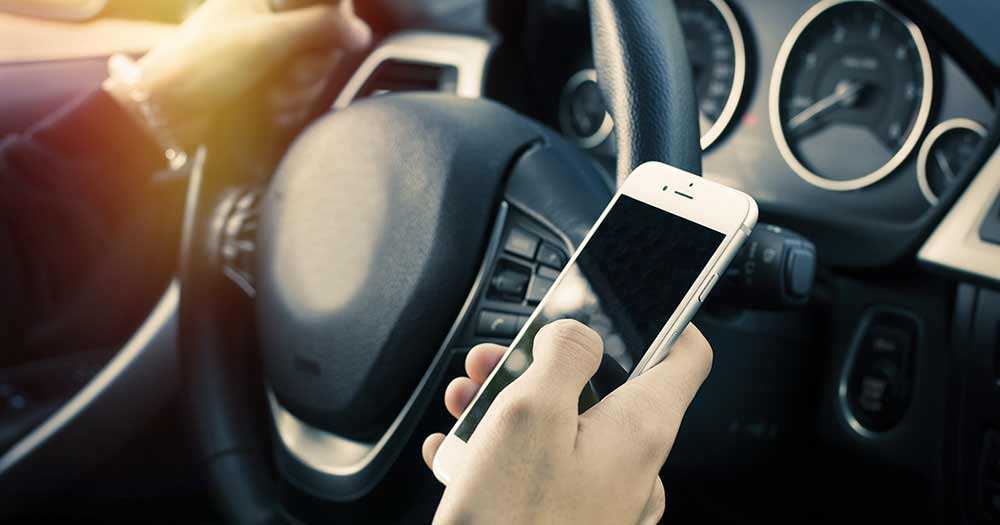 Most of us know by now that touching or holding a mobile phone while driving in Australia is strictly prohibited. Your mobile phone must be connected to your car via Bluetooth or in an approved, securely mounted cradle so it’s hands-free. For L-Platers and P-Platers, phones are not to be used at all while driving.

Here’s a general rundown of the rules so you don’t run the risk of doing the wrong thing.

All around Australia holding or touching a mobile phone while driving is a no-no. Each state and territory has its own offences and penalties.  The term ‘mobile devices’ generally includes: mobile phones, tablets, ipods (or other small portable music devices) as well as satellite navigation systems, and the rules for each are different. But if you have been charged and weren’t using a mobile phone, talk to us.

You can touch your phone if …

Your phone is connected to the car via Bluetooth or is in securely mounted in an approved mounting device and you are a full license holder. Touching it means you can set the navigation, change the music, or to make or receive calls.

However, the only time it’s acceptable to pick up a mobile phone, take it off the mounting device or hold it while you’re driving is if you are passing it to a passenger. Or, if you have been stopped by a police officer and it holds your identification.

No phones for restricted license holders

L-Platers and P-Platers are considered ‘restricted license holders. They are not allowed to use phones AT ALL while driving, this includes using Bluetooth to stream music – so it’s best to make sure your phone is packed away somewhere you won’t be tempted to touch it.

L-Platers and P-Platers can use navigation devices though. So long as the navigation is ‘built-in’ to the car’s dash display. Portable navigation systems like Tom Toms must securely mounted in an approved mounting device.

You should also know – and not many people do – that a driver can also be fined if a passenger has a screen anywhere near the driver’s line of sight. So, for example, if you have a passenger watching videos in the passenger seat and they lift the device to show the drive something, this is breaking the law.

The rules to mobile device use apply while the car is on the road, so this does include while idling, or waiting to pick someone up. All drivers (including those on restricted licenses) can use a phone to display a digital driver’s licence or vaccine status (which could be required at borders) if you have been stopped and asked by a police officer or someone else in authority to do so.

All drivers (including restricted licence holders) can access the wallet or ‘payment’ function on a phone if they are in a driveway, a carpark or a drive thru.

The reason that rules are strict and penalties are hefty is, quite simply, because driver distraction is a leading cause of death on our roads. And contrary to popular belief, mobile phone use while driving is not restricted to young offenders.  In NSW, “use mobile device offence” will cost you over $500 in fines and 5 demerit point (on a double demerit weekend, that’s 10 points!)

Don’t think you won’t get caught either – the NSW Government has invested heavily in high-definition mobile phone detection cameras, including fixed and transportable cameras. These can detect the movements of a driver in all weather conditions, and they are stationed throughout the state – many operate in regional areas like ours.  Ballina and Coffs Harbour are notorious for fixed cameras you can’t detect – there is no warning.  In Ballina recently, a client was detected using her phone while driving, by one of the fixed hidden cameras, and in the course of this offending, the camera also detected her license plate and she was charged with drive unregistered and uninsured vehicle.

Just so you know, most of these cameras are so high-tech they can also detect if you’re not wearing a seatbelt. And drivers, remember that if your passengers are not wearing seatbelts, you will be held responsible. So, buckle up.

Fines and penalties can be severe

If you are caught, you may not even realise it until the fine arrives in the mail, then it is up to you to prove that you are not guilty. Fines must be paid by the due date, otherwise you risk accruing interest and penalty fees. And don’t forget that over holiday periods, such as Christmas and the New Year, double demerit points are in force.  Penalties are severe and could lead to the suspension or loss of your licence.

You can challenge any traffic fine via the Revenue NSW website, and if you are unhappy with the outcome, you can proceed to court. However, you should know that if the court determines that you are guilty of an offence, it can impose harsher penalties, and in some situations you may have to pay the legal costs of the RMS as well.

This area of law is a mine-field of regulations, and depending on which entity suspended your license (RMS or Police) also affects what options you have and what time frames you have to exercise these options.  Irene Healy of our offices is uniquely skilled at preparing these matters for court, so use our online “help” form, and be sure to include your number, and Irene will be in touch.

We service NSW, but specifically the area from Coffs Harbour to Byron Bay, Ballina and Tweed Heads regions on the Far North NSW Coast.

PrevPreviousChildren as young as 10 can be held criminally responsible. Is that too young?
NextClass Action launched by attendees of Splendour in the GrassNext